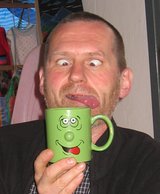 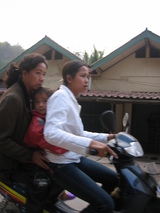 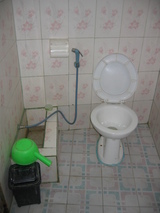 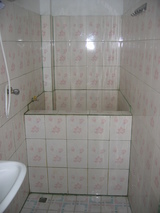 Lao toilets are a bit different. The pipes can't handle paper, so waste paper goes in a small bin. Sometimes there's no paper, but instead there's water for washing yourself, which is also used to flush the toilet, since toilets here don't know how to flush themselves. This works by scooping water out of a large basin into the toilet using a small bowl. Oh, and most toilets are squatters, not sitters. It's all easier than it sounds, though I quickly learned to carry my own toilet paper.

Prepared with all that toilet wisdom, I still couldn't entirely figure out the bathroom in our hotel in Pak Beng. Why is there a half-height tiled wall enclosing half the floor space? It's a mystery. All I know for sure is that the room stunk like a cesspit a few hours after we moved in, and all the other bathrooms did too. Did we do something wrong?

In any case, we were off again. One more relaxing day on the boat. Mike and I decided we could just do the whole trip like this. "Have fun with those 100km days, guys. We'll just be drifting down the river on this boat."

Our boat is owned and operated by a family of four. I thought they lived on the boat, but today we stopped for a few minutes at their village, Ban Hatkham. ("Ban" means "village".) After some fruitless attempts to take pictures of incredible butterflies, I grabbed my beanbags and a crappy flower stick I'd gotten in Bangkok and went off in search of children. They were easy to find, but hard to impress. They didn't think much of the flower stick (who can blame them?) but seemed to dig the juggling, at least the ten seconds I finally got around to right before we had to get back on the boat.

What struck me most about the village was the layout. Sure, it was neat to see all the farm animals wandering around, and the primitive buildings were interesting, but odder still was the lack of formal paths. No roads, streets, trails, or even regular arrangement. Just a bunch of buildings stuck onto the side of a hill. Not that they need any of those things. It's not as though they have a post office demanding a well structured addressing system. It's just something I hadn't considered.

I spent most of the day alternately looking at scenery from the boat and reading The Damage Done, by Warren Fellows. He tells his story of getting caught smuggling heroin out of Bangkok and spending eleven years in a Thai prison. I can sum it up for you: don't do that.

Our boat is fairly large. We've got enough room for each of us to have a two-person bench to ourselves and still have plenty left over, plus a carpeted area in the back where we can play cards or just get out of the wind. Every now and then another boat goes by and provides contrast. There's one other boat our size, and it's bursting with backpackers.

Then there are the speedboats. They're small, fast, and loud. They can just barely fit eight passengers, who have to sit and do nothing the whole ride, wearing helmets, life jackets, and if they knew what they were getting into, earplugs. They'll do our two day trip in half a day, but what's the point? They'll arrive early and frazzled so they can spend a day and a half trying to do something half as enjoyable as we did.

Tomorrow we'll finally do some real riding, but today I'm so relaxed I don't care too much how it goes.

We finally drift into Luang Prabang just before sunset, wave goodbye to the boat, haul our gear up the long stairs and onto a truck, then unicycle through town to our hotel.

It's strange to see other tourists. This is the first place we've been since Bangkok where there are more than a few of them.

At dinner tonight, I did a quick calculation and told everyone that drinks were on me. People made a big deal about it, which I thought was funny. Drinks for 20 people! Wow! Big spender! At the end of the meal people started taking out their money and I had to jump in. No, really, I'm buying the drinks tonight. The bill: 206000 kip! Wow! Two hundred and six thousand kip! So after verifying that dollars are acceptable, I pull out a crisp $20 and pay the monstrous sum with a single note. The restaurateur took it a little tentatively, then asked Jason what it was. $20. Ah, ok!