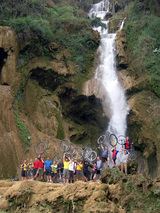 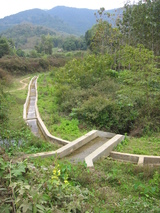 At last, a big ride. Also, as it turns out, an almost entirely unpaved ride. Welcome to Laos!

We rode out to Kuang Sii waterfall, a tremendously scenic spot, worthy of postcards and writing home about. We took pictures at the falls, hiked around (gotta get some exercise, after all), went for a swim in the frigid water, and gawked at the bears and tiger liberated from poachers. I have pictures of all that, but as usual, the stuff we saw along the way was more interesting.

Oh, and there was that whole unicycle part too. After having arrived in three towns by boat, today we finally rode into a village, causing exactly the sort of ruckus we'd all dreamed of. Some of the better riders showed off their crazy skills to a curious crowd, many photos were taken, and we were off again.

One of the nice things about digital cameras these days is that you can see right away what you actually took a picture of and how it came out. But on a trip like this, there's an even bigger benefit. You get to show it to the people whose picture you just took, transforming the otherwise lopsided relationship from observer/subject to a real interaction. We're still the ones walking away with the souvenir, and it's unfortunate there's no easy way to hand out prints, but people willing to be in a picture often like seeing themselves in the camera, and it's nice to be able to give back a little when getting so much.

Riding on dirt doesn't have to be all that different from riding on pavement, but that's if the road is in perfect condition, and dirt roads never are. Bumps, rocks, scallops, washboards, it's all great fun. It always makes for more interesting riding than a paved road. It's also more work though, so even though we only rode 62km today, about 50km of it was unpaved and it felt like a lot more.

Jason got video of me unicycling past some water buffalo that were walking up the road through a village. I hope it came out.

I rode the whole distance today without sagging on the support vehicle. This was a good thing, since we didn't have a support vehicle, but still I felt good about having a no-sag day. I expect it to be the last one. It's going to get tougher from here.

But before the going gets tough, the tough get a massage. At home, a professional massage costs about $80/hour. In Luang Prabang, the going rate is $3/hour. There are a few other differences. The rooms are private only by virtue of some curtains separating the beds (a mattress on the floor; no tables), and the style of massage is quite different. Also, my masseuse was 16 years old.

I have mixed feelings about that, but they're the fairly predictable mixed feelings of "I can't believe a 16 year old girl is climbing all over me" vs "I can't help but think this is not how a 16 year old girl should be spending her time". She really did do a good job though, and it was probably the best massage I got on my whole trip. (Most of the others were done by women, but none so young.)