and waited and waited. The thing about buying a brand new piece of machinery from a Swiss perfectionist is that when a defect is discovered, he wants to fix it before delivery. I'm ok with that sort of attention to quality, but I needed to get started on my training, so I bought a coker.

The coker is an ordinary unicycle with one glaring difference. The wheel is really big. 36 inches big. Look at the photos. It's a monster. I'd tried Corbin's coker at Burning Man for about a minute, but that was it. I was jumping in with both feet, which also turned out to be the way I learned to mount it. Yes, it was scary, and yes, it was harder to ride than a normal unicycle. But they're faster, and that's important. 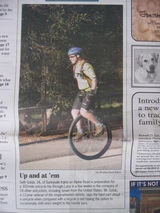 My favorite part of preparing to go on this trip was telling people about it. Most people were excited. Some thought I was insane. Many wanted to know how it was going to work. My favorite conversation went like this:

"I'm going to unicycle 500km through Laos."
"At no point in that sentence could I predict what you would say next."

My enthusiasm waned over the months of preparation, but since I'd already told all those people, I figured I'd better go ahead with it. 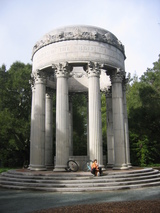 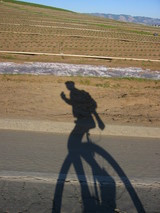 Step 1: learn to mount. Step 2: ride as much as possible. A few veterans told me that three months would be long enough to train for the trip. I was skeptical. I'm not a couch potato, but I'm also no athlete, and I'd never ever trained for anything, so I didn't really know what I was in for.

To help motivate myself, I kept detailed logs of my training rides. Avoiding an irrevocably blank box on the calendar was sometimes enough to push me into riding. It also helped that I wasn't alone. Of the seven American riders going on the trip, six of us live in the Oakland, San Jose, Santa Cruz Greater Sprawl area. Not exactly the same city, but close enough that we can go on rides together, which we often did.

Training was hard, and it was hard because I made it hard. (And because of all those hills!) I pushed myself because I was worried about not performing well enough to keep up. On every group ride, I'm the guy in the back who the other riders stop and wait for every now and then. It bugs me, and the goal is for that not to happen on the trip. Worse, if I'm too slow on the trip, I may have to just stop riding and get on the support truck.

I worried about that a lot, so I rode as much as I could. Bad weather and bad weather reports foiled some rides, and insufficient emotional energy foiled some others. I found it hard to maintain enthusiasm for three months of training.

Several friends told me I shouldn't stress about it, just do what I can and have fun, but I've been the guy who can't keep up on enough rides to know I don't like it, so I was going to work hard to change it. Just getting myself to the point of being able to keep up didn't seem like an unreasonable goal. Mike pointed out that I was trying to keep up with some of the world's top distance unicyclists, but that was going to be true on the tour too.

I didn't know what the trip itself would be like, but by the end of the three months of training I knew one thing: I never wanted to do this again. Of course in some sense, I would never have to. Part of what made it difficult was the uncertainty due to inexperience. I had to train as hard as I could because I didn't really know what would be enough.

Most of the things I wrote are pretty negative, which is fair because it really was hard on me. But I did often have fun with it, and I often enjoyed the rides, especially once I started bringing music. And it was fun to watch myself improve. On my first group ride in Santa Cruz, I had to walk up most of the hill. Just three weeks later, I rode up. Huffing and puffing, I still felt great for having obviously improved and in such a short time. I got stronger and faster, and then after too much damage to my knees from running out of high speed dismounts, I got a little slower again. It was hard, but there were plenty of good times in there.

As I said in the interview I did for Uniplex, the way I did this was the wrong way. It was the option I had available, but the right way to do this would be to get into distance unicycling without a looming deadline. Go on rides and have fun. Push yourself to improve if you want. Then if you want to go on a tour, you'll have some idea of what it would mean and how much you need to improve, and you'll already have your gear sorted out.

Ah, yes. The unicycle. I was doing more than training. I was also building a unicycle. Oh, sure, I'd gotten one in the mail, and I could just ride that as-is, but I got a lot of advice about seats, handles, cranks, pedals, tubes, and brakes, and a lot of it made sense. Having a more comfortable seat, having a way to put some weight on my hands and off the seat, having the wheel be lighter where it counts most, these things all could make a big difference, and as the trip got closer, I could see I would need whatever help I could get.

The brake I got with it was pretty much unusable, as was the KH air seat. This level of unicycle gear isn't quite there yet. People will sell you stuff, but it turns out that you need to be prepared to modify the hardware or even to give up on some of it.

But I didn't care. I never cared about the gear. I didn't want to become an expert on esoteric unicycle design and maintenance. I just wanted to buy something that worked and forget about it. But I did. It took time and it took energy. Some of it was necessary, if only to become intimately familiar with equipment that would constantly be in need of adjustment or repairs, and some of it did let me improve the equipment and improve my performance. But a lot of the work was in dealing with things that just didn't quite work right, which was frustrating.

Learning to change a flat was a potentially useful experience, but destroying all three 29 inch tubes in the process of trying to shed some weight was not the most fun I've had in years. I'm pretty good at changing the tube now, but it's still a huge pain in the ass compared to a smaller wheel.

I also had to make a bag to carry the ginormous wheel. Who thinks of these things? "You're traveling? Don't forget to fabricate some luggage." I could have paid large amounts of money to have a nice bag made, but it seemed excessive for a potentially one-time need. In the end, I discovered the joy of Grip Clips and made something out of a cheap plastic tarp. My bag raised many eyebrows at airports, but it worked well. The guy who makes Grip Clips lives nearby, so I picked them up in person. We got to talking, and it turned out he's learning to unicycle and we had some mutual friends. It's a small world, especially after you weed out all the normal people.

The End of the Beginning

The geared unicycle did finally arrive in December. I took it for a quick spin, but decided there just wasn't enough time to risk switching. If I switched, I'd be giving up on the coker I'd worked so hard to get used to, and I could be left with nothing I was ready to ride. It looked great though, and I was sad to be leaving it behind and hauling a monster with me instead.

The gradual passage of time accumulated when I wasn't looking. After three months of talking about it and over 1000km of training rides, suddenly it was time to go, ready or not.