I'm not the only one sticking around, so in theory I don't need to start my solo lounging quite yet. Tony, Florian, and Bruce are also around another day, and Gilby will be here until he figures out how to leave. But somehow I end up off on my own. While other people visit the National Museum, I struck off to see the looms. 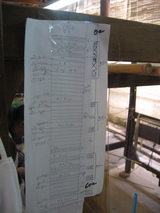 I love looms. They're mechanically complex enough to be interesting, but simple enough to understand. Carol Cassidy Lao Textiles sells woven silk at what I'm told are rather high prices (I didn't even ask), but lets people wander around and inspect the process for free, which to me is the best part.

I spent quite a while there, which I'm sure the workers found amusing. How long is this guy going to watch me winding thread onto a bobbin? He's taking another picture? Each loom was a little different, which I thought was interesting. Most of them worked pretty much the same way, but used slightly different methods to keep tension on the warp.

There was one part of some looms that I couldn't figure out. What was the purpose of the loosely woven pattern whose warp threads hang down through the primary warp? Also, I hadn't yet figured out how they got interesting patterns into the weave, beyond the simple alternating blank areas. The two were obviously connected, but I didn't figure it out until I saw it in action.

It was all fascinating, but I'm amazed it's worth the effort. I guess expensive fashion yields status, and that's important in any society. Part of me thinks that if I had as little as they do, I might spend my efforts on something more practical, like better farming technology, but there's an argument to be made for spending some effort on things that you enjoy. Else what's the point of it all?

I heard that weaving is still popular. I never saw it out in the villages, but other people (who weren't busy juggling or photographing butterflies) saw someone weaving in Ban Hatkham.

The rest of the day is a blur. I recommended the weaving center, but it closed for the day before the others could visit. Most of the others head for home, but I'm here one more day and Gilby still has no plans to leave. We try to figure out what's going on around town, thinking we could Go Out and Do Something, but we never manage to find a newspaper (as far as we can tell, no one sells them) so we're without a clue. We'll have good drinks and food later, but first it's clearly time for a massage.

Despite my best intentions, I hadn't managed to get a massage since leaving Vang Vieng. I didn't like the looks of the places I'd seen, but Lonely Planet's description of Dr Thepsomphou's sounded good, so Gilby and I got a tuk-tuk over there. (Actually, we got a ride to Patuxai, because it's nearby and we know how to say it well enough to be understood.)

Getting the tuk-tuk was kind of fun for a change. I decided to find out how much it should really cost. The best way to test a limit is to break it, and the only way to know if you've finally figured out the market rate for a tuk-tuk ride is to walk away from a negotiation and have the driver not chase you down with a better offer. The beauty of this approach is that tuk-tuks are a dime a dozen, so once you have better data, you get to start over with a new one half a block up the road. It's like restoring a saved game whenever you get clobbered.

There was one tuk-tuk driver who, as far as I could tell, just hung out in front of our hotel all day, sometimes literally, in a hammock in the back of his tuk-tuk. Every time I stopped by the hotel, there he'd be, asking me if I needed a tuk-tuk. I guess fleecing a tourist just once or twice a day is enough to live on.

Ah, but the massage. This place was a bit more clinical than the others I'd been to, but it was also much bigger. They stuck me and Gilby in adjacent slots and opened the curtain partition. I pulled it closed (Do I really want to stare at Gilby getting a massage for an hour?), but they opened it again. I think our masseuses just wanted to be able to chat, which they did for most of the session. Eventually though, they included us in the conversation and it became a fun party.

It started when my masseuse got to my quads and asked me if I did sports. This happened in Vang Vieng too ("do you exercise?"). I admit it. I enjoy having a woman whose hands have been all over me for an hour imply I'm in good shape, even if it is just the one freakishly overdeveloped muscle. But I figured I'd give her the whole story, and I had my language cheat sheet with me. After some gestures and awful pronunciation, I ended up just handing her the sheet and pointing to "lot thip gong deo" ("bicycle with one wheel"). She knew a little English and we tried our best to chat while she continued to bend my limbs in various ways. It was by far the most social massage I've gotten.

At one point an older woman subbed in for a minute while my masseuse ran off to fetch her some keys. Before the sub left, she pointed to my nipple and said "good color". I'd have been perplexed if I hadn't been a student of Lao culture these past couple weeks, but instead I took the compliment in stride and replied "thank you. all natural".

I've had a few opportunities to watch some local TV. I couldn't understand the shows at all, but the commercials were usually pretty obvious about what they were selling, and half of them were pushing skin whitening cream, which is all the rage here. Pale skin is good, according to the local aesthetics, and I saw plenty of women who were obviously using whitening cream on their faces (and only on their faces). I thought it looked awful, but I'm not going to be too judgmental about it, since I've got my own pointless and damaging cultural biases.

Well, just as skin should be pale, nipples are supposed to be pink. I know this because when I was in Talat Sao yesterday I saw Pink Nipple Cream for sale, right next to the Armpit Whitening Cream. (Ok, now they're just being silly.)