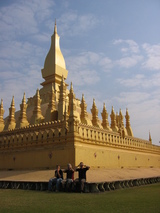 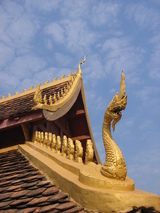 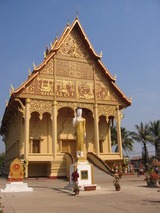 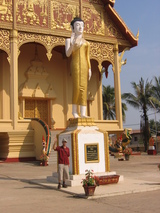 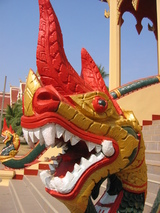 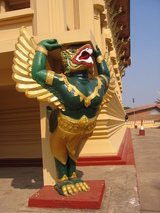 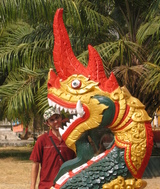 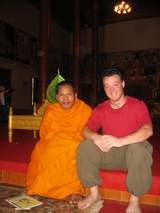 And that's the end of the tour. We said goodbye to the support crew last night, sent Jason off to fly to Chiang Rai to start his next tour (bicycles), and most of the unicyclists will head off to the border this afternoon, beyond which they'll take an overnight train to Bangkok. That's my plan too, but I'm going to stick around here a couple more days first. I've got some time, I don't know when I'll be in Laos again, so I might as well see the sights.

When I decided, weeks ago, to spend a few extra days here, I didn't think anyone else was going to and that I'd probably spend the days here much like I spent the rest day in Vang Vieng, being as lazy as possible. I envisioned spending an entire day reading in a cafe, watching the street go by. But I forgot all about that plan. This is, after all, the capital city, and there are things to see.

Bruce, Tony, Gilby, and I went off to see Wat That Luang, which surely must be the shiniest building in all of Laos. There we saw the fruits of an entire yearly output of the Lao national gold paint factory as well as a staggering number of oil paintings all by the same guy, Mr Khamsouk Keomingmuang, who I guess must be the only painter in Laos.

Hans and Sid met up with us there and we got a tuk-tuk over to Patuxai so we could climb up inside it. I was surprised to discover that it wasn't just a stairwell up to the top, but in fact housed seven spacious floors. I was also surprised to discover, though really I shouldn't have been by now, that four of these floors were entirely devoted to selling souvenirs.

One ice cream and some city-gazing later, we walked over to Talat Sao, the big market in town. We agreed to meet in an hour, and we scattered. Someone pointed out that this was basically the local mall. At first I found that a little depressing, since I didn't come halfway around the world to walk around a mall, but it didn't take reality long to slap some sense into me. Seeing how people shop is a great window into a society.

Unlike most malls I've been to, we were outdoors most of the time. Sort of. It looked like we were indoors, but if you looked closely at what was over your head, you'd see only fabric, blowing in the wind. I eventually found a building with walls and stairs, but I think I spent most of the hour walking through aisles of what I guess were outdoor booths.

Some shops were for tourists. Silk was everywhere. Since the start of the trip, I'd said that I wanted to see a shop specializing in things you can't bring on a plane: knives, lighters, nail clippers, tasers, swords, etc. I never did find it, though I did find all those things for sale. I also found some other dubious souvenirs: a giant mounted lobster prominently labeled "SOUVENIR", countless soapstone chess sets (beautiful, but who can carry one of these home?) and exquisitely carved ivory tusks (do they get seized by customs and sent back to the shops to be sold again?).

There were plenty of items for the locals too though, and most of the shoppers looked like they lived there. Refrigerators, stereos, cosmetics, books, strange food. 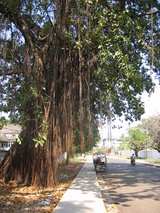 Speaking of strange food, for about a week, my body was pretty reliable about being queasy and otherwise expressive right after each meal. That wasn't as bad as it sounds. It usually didn't last long, and the predictability was handy, though it wasn't 100%.

Being back in a city, even a small one, came with some luxuries, but also some restrictions. There are two places you might want to be when you're experiencing the joys of severe gastrointestinal distress. Being at home is always nice, and being in the middle of nowhere turns out to be fairly convenient also, as long as you've remembered to bring some toilet paper. (You are carrying toilet paper, right?) Thanks to the local microbial fauna, many of us on the tour got to enjoy the great outdoors in a whole new way as bodily urgency demanded.

In a city though, there are toilets, and you're expected to use them, rather than just step to the side of the road. Generally, I consider this to be a good thing, but sometimes time and tide are not the only things that can't wait. I was astonished at the extent to which I could dominate what seemed to be irresistible internal forces through sheer willpower, but honestly it was a close thing, and if that one guy occupying the one stall had taken any longer, I was just going to duck around to the back of the building. But then lunch didn't make me ill, which was a nice surprise.