I said a few times during training that the hardest part about long distance unicycling is getting out of bed in the morning. Today it was really hard. I don't know what it was, but for some reason I felt done. Maybe it was pushing myself for yesterday's long ride, maybe it was just the days finally adding up. It wasn't the frog in the shower; I thought he gave the place some charm. All I knew for sure was that I didn't want to be awake, I didn't want to get up, and I really didn't want to spend the day unicycling.

But I also didn't want to look back a month from now and say, "I only went ____ km, but I could have gone ____ if only I'd bothered to ride that last day." or even "I really wish I'd ridden that last day instead of giving up." It didn't seem very important right now, but sometimes you don't know what matters to you until it's too late, so I figured I should do what I could to give myself the most to look back on.

I was beyond irritable; I was irritated. Every little thing. I can't remember the last time I was this grumpy, and for me that's saying a lot. I did my best to keep it to myself, not wanting to pollute anyone else's day.

So off I went, grumbling internally all the while. I brought music, but it wasn't helping. My knees hurt from yesterday, my right ankle hurt (that's been building up all week). My back hurt yesterday too, and at first this morning I thought maybe I'd gotten away with something, but 15 minutes into the ride, my back started hurting too.

I can cope with pain -- it didn't get to me yesterday -- but it's harder to cope with a sour attitude, and feeling broken just fans those flames. I kept on riding, but I decided I'd get on the truck when it arrived. I'd just ride on and off today, riding as much of each leg as I can.

Of course the truck catches up just as I've finished hiking up the biggest hill of the day. Grumble grumble. I blow it off and ride down, but I do let it sweep me up the next time it catches me. On and off all day, trying to care enough to keep going but not enough to be disappointed by shortfalls. I guess unicycling really does require good balancing skills.

If I were in a better mood, I might take the opportunity to admire Thomas, who rode the mountainous day from Luang Prabang to Kiu Ka Cham despite feeling ill and having been up all night. But I'm in a foul mood, so my thoughts are for myself. My soul has been ground, not beneath anyone's boot heel, but between my ass and the seat of my unicycle.

I eat lunch out of a sense of dietary obligation, then after talking it over with myself, I throw my mental hands up in the air (lacking the will to bother with my real hands) and get in the van.

We have two more segments of the trip. A 13km stretch, which is fairly short by our standards, then a final 13km ride that will take us into the capital city. Skipping an entire leg was not easy. Everyone else was riding this leg. A few were on bikes, but no one just kicked back and got carried through this flat stretch. It felt like it was the first time I'd sagged for personal reasons, rather than logistics, but looking back it's harder to see what made this one so special other than how I felt: broken, in body and spirit.

But I decided that the only reasons I had for riding were to impress other people (fellow riders by not sagging and people back home by increasing my total mileage) and it just wasn't actually important to me. So as crushed as I felt, I was also a little proud of myself for easing up and paying attention to saner priorities.

I felt a little better by the time the group rolled in, and we all rode, everyone on unicycles again, the last leg as together as we could manage, the fast people presumably going as slow as they could stand, while the slow folks (myself included) struggled to keep up. 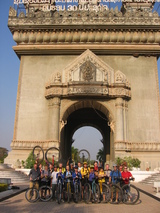 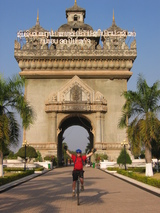 Traffic gradually increased until we were riding through the middle of a city. Before long, we arrived victorious at Patuxai, the Victory Arch, or as I've dubbed it, lao Arc de Triomphe, the Faux Larch. We took pictures, patted ourselves and each other on various backs, distributed hugs we'd been saving up, thought about how long and short a journey it had been, and finally headed to our hotel.

Some folks rode the truck to the hotel. We were done with the tour, after all, and we'd come a long way. But I was feeling good finally, so I opted to ride to the hotel with the other die-hards. At least, that was my intention, but somehow I lost sight of them just moments after they got started.

How do I always manage to get going last? And how did I lose them so quickly? Traffic was thick, and I couldn't see a unicyclist anywhere. I had no clue where the hotel was, but I knew one thing: our truck was heading there. So I followed the truck.

This tour was many things. It was endurance riding, it was sightseeing, and it was a series of cultural encounters. One thing it hadn't been until now was a flat-out traffic-weaving urban guerrilla cycling adventure. I had three goals: don't die, don't give up, and don't lose sight of the truck. As far as the riding goes, this was the most fun I had on the whole tour. There's no rush like just barely keeping up with the only people who know where you need to go, darting through traffic, hanging onto slowly moving vehicles, timing cross traffic, and stopping cars with an outstretched hand (see, it does work!).

Of course, I was never in any real danger of losing the group. The other riders had gone a different way, but people on the truck knew I was following them and were presumably watching me give chase, and I was carrying the name of the hotel. But I wasn't thinking about any of that, so it was lots of fun. I'd take this over climbing a big hill any day, though the hill is surely much safer.

Finally, our hotel and a hot shower, sort of. This hotel has a central water heater, and for some reason the water temperature bounced up and down like a fat man on a pogo stick. Like a frog on a ferris wheel. Or like, um, a thing that goes up and down the way the water kept getting hot and then cold again.

Hot showers on this trip have been elusive. There was usually something that looked like it was going to provide a hot shower, but each one managed to fail in its own peculiar way, instead providing a bizarre and entertaining puzzle, and usually lots of cold water.

Another odd feature of our hotel here is that the surface of the beds deform when we lie on them. They're even softer than we are! And no 4am roosters! Clearly, we were in the big city.