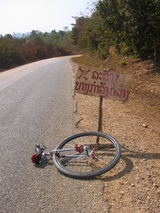 Up to now, we've been meeting for breakfast at 6am and getting on the road by 7, by which time the sun is up. Today's ride is long though (107km) so instead we had breakfast at 5:15am and were on the road an hour later.

It wasn't the first time we rode to breakfast in the dark (this time across a mercifully unrutted dirt airstrip), but it was the first time it was still dark after breakfast when we started the day's travels.

I've never ridden more than 74km in a day before, but when I was riding solo that only took seven hours and that was with much bigger hills, so I don't see any reason I can't do 107km today. I decide to get serious about it. Today, I'm packing music, and I'm resolved to stop at rest breaks only as long as I really need. Pause, refuel, and go.

Ten or fifteen minutes into the ride, the sky started to lighten up a little, and eventually the sun turned up. I was happy to start this early though. We're in the lowlands now, and it's going to be hot. This is the first morning I don't need a jacket. Comfortable, but foreboding.

I've covered 60km by 11:00. I'm a machine. I'm cruising. Riding fast, finally hitting my groove. I can do this. There aren't so many hills, now that we're out of the mountains. But it's getting hot.

By noon the heat is unbearable. I bear it for another twenty minutes, then I notice that not only do I feel awful and have slowed to a crawl, but I stopped sweating and feel cold. Not good signs. I try stopping at a roadside stand for a cold drink and salty snack. I end up with a warm drink and spicy snack, the closest they could offer, but it was fun interacting with the locals. I think it was my first transaction that involved no English at all, not even number words.

I press on a bit more until the paved road drops suddenly to rocky dirt. I'm too wiped out to cope and I stumble off. I drag my feet over to some shade, and as my temperature drops below boiling, my three working brain cells notice that I'm standing in front of a place that sells actually cold drinks and has tables and chairs in the shade. I could keep riding. I know I could. But I think about how little I'm going to enjoy it, and realization blooms in my head: I have another option. I could buy a cold drink, sit in the shade, and wait for the truck to come along. What a delightfully appealing idea! So that's exactly what I did. I had a deliciously cold soy milk and rode the truck 10km to the lunch stop.

Some people had taken off already, but it was Beau's birthday, and I was in time to see what his mom had gotten him for a present. Grilled rat on a stick! Yay! I don't remember what I got for my 14th birthday, but Beau will never forget what he got for his. I mention that to Rob, who points out that Beau gets rat on a stick every year. I try again with Beau, and says he'll probably forget, but he'll remember that I remember, so he'll just ask me if he wants to know. I'm surrounded by comedians! What kind of person jokes about a rat on a stick?

It was a while before I felt like eating (nothing to do with the rat), but we'd split the riders and the support into fast and slow groups, which took some of the pressure off. No need to rush. An hour or so later, having finally shoveled down some food after all, I rode the rest of the way to Ang Nam Ngum (Nam Ngum Lake). 97km. I can live with that.

Nam Ngum Lake exists because of Nam Ngum dam, which supplies most of Vientiane's electricity. The dam is impressive in the way that most large things are, and the lake it created is really pretty. The mountains around here are steep and pointy, and where once there were mountains, now there are islands. I'd love to come back with a kayak.

My knees hurt, but I think they'll be ok in time to trash them again on tomorrow's long ride.