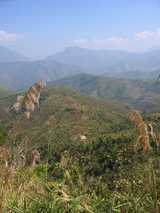 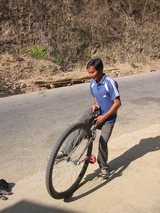 Today was the day I'd been dreading. For over a month I've been staring at the elevation profile and itinerary Jason sent out. After a 25km "flat" stretch (hilly, but not quite mountainous), we were to ride 600m up a mountain, then 600m down the other side, then 1000m up the next mountain, over a total distance of 78km. That's both more climbing and more distance than I've ever done in one day.

I did ride up the first mountain. Halfway up, I found it encouraging to look far below at the tiny ribbon of road I'd started on. I passed a few farmers and a few trucks went by, but most of the day was just between me and the uphill climb. The views were amazing, all the way up. It took a while, and I stopped several times for short rests, but I rode the whole thing and hit the top with a tremendous sense of accomplishment.

I also had a tremendous sense of "where the hell is everyone?!" since there were supposed to be two official rest stops with food and water. I had some food on me, but I'd planned for those rest stops and I'd run out of water. Grr. I met up with Grace and David near the top and Grace shared some of her water with me. The support truck caught up with us then too, but didn't have food or water on board. So we rode the 600m down the other side of the mountain, enjoyed the views on this side too, and I was very happy I'd installed a brake just two weeks before the trip.

I'd just started up the next mountain, which I hadn't really planned on riding up, when I finally came across everyone having lunch. By this point I didn't think I'd see anyone until the end of the day and had just stopped at a roadside stand for a drink and some snacks.

Apparently there had been rest stops, but the van had left before the last people got there. Oops. I was annoyed at the time (a time that lasted hours, unfortunately), but once it was clear what the problem was and that it shouldn't happen again, I shrugged it off and tried not to whine about it. The trailing truck will carry water from now on, just in case.

Riding last did live up to some of my fears though. It was irritating every time the support truck caught up. They'd shadow me, driving at my snail's pace with their loud diesel engine implicitly growling "You're last; hurry up" and spoiling the otherwise peaceful ride. Grr. I told them to back off a few times and they eventually got better about it. I guess the support was bound to be a bit shaky the first day. They've never done this before, and communicating with them is difficult.

I was pleased with having ridden up and down the first mountain though, and was perfectly happy to ride the van up the second one. I probably wouldn't have been able to accept a ride so easily on the first hill, but having conquered that one I knew I could ride the second one if I just took the time, and didn't feel like I had anything left to prove.

I also knew it'd take me an hour or two longer than everyone else to climb the next one and didn't think they'd be too happy about the trailing truck, with all their baggage, not showing up until late. I expected the big spread of rider speeds to cause problems, mostly for me, since the fast riders seem to think compromise is the responsibility of the slower people, but I was trying not to let it bother me too much. (And I swear I'm done bitching about it now.)

The town we stayed in was interesting though. Kiu Ka Cham isn't a place people stay. It's a tiny town on the highway from here to there. It's somewhere you stop for gas and a snack. There were two guest houses and we filled them both. I think we even displaced the owners of one of them from their own room.

When I arrived, Rob was entertaining a group of kids. They'd stand around watching his every move, then he'd saddle up and chase them while they scattered and ran, screaming and laughing. 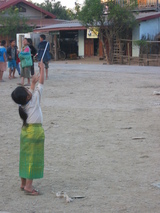 A couple people played a pretty good game of netless badminton on the side of the road, and some younger kids had another game. Take a plastic drinking straw, stick a bean in one end, point it bean-end-up at the sky, then use a rubber band to shoot it up into the air. Yay! Watch it fall to the ground and start again.

This has got to be up there with the roll-a-hoop-with-a-stick game, which I thought died out around 1920, but I've seen a couple kids here playing it. I really want a picture, because it's so Olde-Timey, such a wonderfully simple game, and is a case of one-person-one-wheel, just like us. But so far they elude my camera, always stopping (usually to stare at me) before I can catch them at it.

Oh, but Kiu Ka Cham. In my guest house, there are two toilet rooms. There's no shower, but one of them has a bath, which consists of a half-height wall surrounding a large portion of the room. There's also a big basin, just large enough to stand in, and a small bowl. I'm told the idea is to use the bowl to pour water over one's self. I'm not sure why there's such a large collection of cold water, but maybe it's the most convenient place to keep it. (The setup in Pak Beng was similar, but there was a shower there and no bowls, so I still don't get it.)

I'm not enthusiastic, but I'm also rather sweaty and grubby, so I'm all set to pour cold water over myself when a miracle occurs. Hot water! One of the proprietors appears with a large pot full of steaming hot water. Hooray! Hans goes first, then I amuse one of the Americans by taking advantage of Hans' European sensibilities and not waiting for him to get dressed before stepping in and getting started. Americans and their nakedness. Sigh. Hans demonstrates a good technique for mixing hot and cold water in the bowl without tainting either supply with the other, and I get a hot shower. Bliss! I don't realize it at the time, but this is to be the most reliable hot water I'm to enjoy for the rest of my vacation, and it had been heated over a wood fire in the kitchen. Only later did I learn that the water had been carried from the river. That's a lot of work for a hot shower (don't forget chopping the wood for the fire) and it was a wonderful luxury to have someone provide it for me.

My notes for today begin with "Up and out before dawn" and end with "My butt is sore". I think that sums it up.