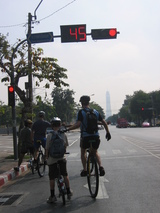 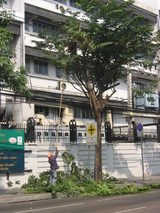 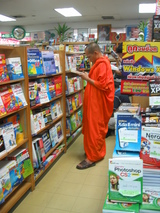 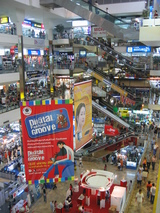 The tour officially starts in Chiang Rai, a small city in northern Thailand (not to be confused with the more popular Chiang Mai, which is farther from Lao), but everyone goes through Bangkok on the way there. I showed up an extra day early, and a few people passed through without stopping, but most of the riders on the tour arrived in Bangkok last night and stayed at the same hotel. I met some of them at breakfast.

The plan for the morning was for everyone to meet in the lobby and go for a ride around town. I wasn't too excited about unpacking my unicycle, putting it together, riding a couple hours, then taking it apart and packing it away for the flight to Chiang Rai. Seeing the traffic yesterday made it pretty clear that a ride around town was insanity. I like biking in traffic at home, but this was different. Jason said the traffic Sunday morning wouldn't be so bad (merely life threatening, rather than certainly fatal?) and he'd take us on back roads and quieter areas (which my pedestrian travels did not uncover), but I was still skeptical. Lacking a strong desire to die before sundown, I opted to sit this one out. There would be plenty of riding in the coming days.

I'm standing outside the hotel after breakfast, looking around, and it really is much quieter this morning. Barry is talking on his mobile. He and Nick flew from Australia, but the airline didn't see fit to put their unicycles on the plane with them, so they're talking to Jason about borrowing a couple bikes for today's ride. He turns to me and asks if I'd like one too. I blink, caught in the headlights. The traffic really is lighter, and dealing with this traffic on a bike instead of unicycle seems manageable. Ok, sure. Count me in.

So I spend the morning on two wheels. It's my first time on a bike since I got my coker three months ago. It's a fold-up bike with tiny wheels, and it's a bit twitchy. Jason notices me having some trouble and is highly amused by the unicyclist who can't ride a bike. Even so, I'd forgotten just how easy biking is.

It was a nice ride, and there really were some less traveled areas. We were on main roads a fair amount too, but one advantage I hadn't predicted is that while one guy on a bike would have to be aggressive, alert, and familiar with traffic patterns to make it through alive, a dozen people on unicycles have no trouble getting people's attention. Still, I was content to enjoy the reduced stress of being on two wheels. Easier starting and stopping and a higher top speed are nice to have in traffic.

I really had the best of both worlds. I got to see the locals' reaction to a group of unicyclists without having to deal with the extra hassle of unicycling. Not only a nice ride, but it helped me relax about the tour itself. I'm sure I'll have a fine time regardless of how much riding I do or don't do.

I still think I made the right decision with the information I had, but there's one more twist that made me wish I'd been on a unicycle: we were on TV. Jason had alerted the media, and a TV crew came out to film us. So, I've probably been on national TV (in Thailand, channel 7), but only in the background while they focused on the unicycles. Ah, well.

Later we headed to the airport to catch an Air Asia flight to Chiang Rai. I was worried about my bags being overweight. We were allowed 15kg and I had 22kg. They only charge $3 per extra kilo, but how would they feel after a dozen of us checked in with overweight bags? What sort of plane were they using? And do I really want to trust my life to a flight that only cost $35? How do they possibly pay for maintenance? But it all went smoothly. I think there were even a few other white people on the flight.

We arrived in Chiang Rai and piled everyone into some sort of small bus. We explained to the driver what we were up to, expecting to surprise him with our crazy plans, but he'd already seen us on TV. The people working at the hotel had seen it too. Will our fame precede us throughout the tour?

I wish I had a laptop so I could write all this up instead of just scrawling a few notes on a tiny notepad, but my backpack is too full and heavy already.

The shock of being halfway around the world is still sinking in, but here near the end of day two, I'm finding it much easier to cope. It probably helps that I'm among fellow unicyclists now instead of being on my own.