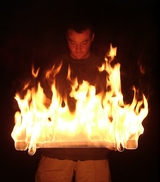 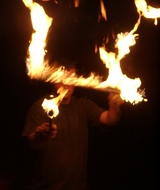 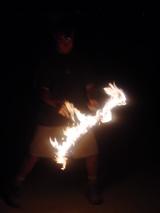 Using a fire devilstick is fun. It looks neat, people are amazed, you get to shrivel up lots of arm hairs, and best of all it makes a great whooshing noise when it spins.

Unfortunately, most fire devilsticks are terrible. They're usually too heavy and all the ones I've seen for sale are covered in metalic tape to protect the stick, and this makes them slippery when covered in soot. You can't avoid getting soot on the shaft, so it quickly becomes hard to use, which means you can't do as many neat tricks with it.

In search of a better fire stick, I've made a few of my own. Most of them sucked, but I'm on the right track.

This is my best fire stick so far.

The idea is to wrap the stick with something that won't get slippery and is also fire resistant. What could be better than kevlar fire wick, just like the torches are made of? Of course, once I had a stick covered in wick, obviously I had to light the whole thing on fire. If fire is good, more fire is better, and this stick is awesome. See the photos at the top of this page. I have to wear leather gloves when I use it because it's really hot.

How to make one

My apologies for the imperial units. That's how they sell things where I live. Try clicking on numbers to convert them between metric and imperial. (It's a feature of my website.)

If you like the balance the way it is, you're done. I used it like that for a while, but I didn't like the way it felt, so I added some weight to the ends.

How to make it cheaper

You can use less fire wick if you just use cloth tape on the shaft. It'll probably get damaged by the fire, but it's cheap and you can replace it. And maybe you can get away without using the metalic tape. I haven't actually tried these things, so if you do, let me know how it goes.

What Not To Do

For the record, here are some pictures of the first fire devilstick I made.

It's a straight aluminum shaft, with wooden dowel sections in the ends just to take the screws that hold the wick wrapping. The shaft is covered in silicone I took off a handstick. This is not a good stick. The aluminum vibrates in an unpleasant way and it gets hot. The silicone tubing was a huge pain to get on there and it gets just as slippery as bare metal would. And the balance is terrible. Don't make a stick like this one.

I made some fire handsticks, and they are amazingly cool. They're shown in the photos at the top of this page, and I've got a page explaining how to make them.

In search of better traction, I've tried wrapping the handsticks in different materials. Grip tape (like you'd put on slippery stairs) works really well on a fabric-covered stick until you get it in the fire, and then it melts. It'd work well on the extreme stick if I didn't light up the whole shaft, but once I do that they're toast after just a few minutes.

I've also tried covering the handsticks in kevlar cord. It's not very grippy and it's a bit dangerous in that it can soak up fuel and burn. This is especially likely if there are torches on the ends of the handsticks and you dip them in fuel. Using handsticks that are mostly on fire is difficult, even with gloves on.

I also tried using metal rasps as handsticks, but without much success. Maybe if I had something coarser it would work.

I'm still in search of good handsticks to use with fire.

The JIS has some useful information on fire juggling. It's aimed at the more popular sport of torch juggling, but is mostly relevant to devilsticks as well. The important thing to remember when selecting a fuel is that your stick is going to get coated with soot, which makes it slippery. Because of this, you want the cleanest burning stuff you can get that is still visible (not alchohol) and not too dangerous (not gasoline/petrol). I use Coleman fuel, also known as "white gas". I've also used kerosene, but it smells worse and generates more soot.